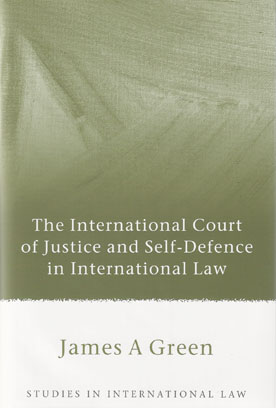 The legal rules governing the use of force between States is one of the most fundamental, and the most controversial, aspects of international law. An essential part of this subject is the question of when, and to what extent, a State may lawfully use force against another in self-defence. However, the parameters of this inherent right remain obscure, despite the best efforts of scholars and, notably, the International Court of Justice.

This book examines the burgeoning relationship between the ICJ and the right of self-defence. Since 2003 there have been three major decisions of the ICJ that have dealt directly with the law governing self-defence actions, in contrast to only two such cases in the preceding fifty years. This, then, is an opportune moment to reconsider the jurisprudence of the Court on this issue.

This book is the first of its kind to comprehensively draw together and then assess the merits of this jurisprudence. It argues that the contribution of the ICJ has been confused and unhelpful, and compounds inadequacies in existing customary international law. The ICJ’s fundamental conception of a primary criterion of ‘armed attack’ as constituting a qualitatively grave use of force is brought into question. The book then goes on to examine the underlying causes of the problems that have emerged in the jurisprudence on this crucial issue.

Contents:
INTRODUCTION I. The International Court of Justice and Self-Defence II. Facts and Rulings of the Primary Cases A. The Nicaragua Case B. The Oil Platforms Case C. DRC v Uganda D. The Nuclear Weapons Advisory Opinion E. The Israeli Wall Advisory Opinion 1 THE CRITERION OF AN ARMED ATTACK IN THE JURISPRUDENCE OF THE INTERNATIONAL COURT OF JUSTICE I. Assessing the Jurisprudence of the Court II. Armed Attack as the Condition Sine Qua Non for Self-Defence A. The Requirement of an Armed Attack B. Armed Attack in the Context of Preventative Action III. Identifying an Armed Attack: A Question of Gravity A. Relating Armed Attack, Use of Force and Non-intervention B. Specific Actions C. A Variable Standard IV. Armed Attack as an Accumulation of Events V. The Level of State Involvement in an Attack VI. Armed Attack in Collective Self-Defence VII. The Concept of Forcible Countermeasures VIII. Conclusion 2 THE CRITERIA OF NECESSITY AND PROPORTIONALITY I. The Caroline Incident: Facts and Legal Claims II. The Applicability of the Caroline Formula A. A Mythical Authority B. Limited Applicability to Certain Types of Self-Defence C. Customary International Law in 1837 D. Adoption of the Caroline Formula since 1842 72 E. Aspects of the Caroline Formula within Customary International Law III. The Contemporary Content of the Caroline Criteria IV. Necessity A. Necessity as 'Last Resort' B. Procedural Exhaustion of Non-forcible Measures C. A 'Reasonableness' Test for Assessing Last Resort V. Proportionality VI. Temporal Aspects of Self-Defence A. Imminence B. Immediacy C. Temporal Aspects of Self-Defence in the Modern World VII. The Marginalisation of Necessity and Proportionality by the ICJ VIII. Conclusion 3 THE TROUBLE WITH ARMED ATTACK AND THE MERGED CONCEPTIONS OF SELF-DEFENCE I. 'Armed Attack as a Grave Use of Force': An Accurate Reflection of the Law? II. Armed Attack as a Self-Fulfilling Prophesy? III. The Merged Conceptions of Self-Defence IV. The Overlapping Functions of the Merged Conceptions V. The Different Functions of the Merged Conceptions VI. The Gap between a Use of Force Simpliciter and an Armed Attack VII. The Overall Indeterminacy of Self-Defence VIII. Conclusion 4 A PROPOSAL FOR REDEFINING ARMED ATTACK I. Defining Armed Attack Differently: Proposals Old and New II. The General Suitability of Necessity and Proportionality III. Implications for the 'Accumulation of Events' Problem IV. Implications for the 'Level of State Involvement' Problem V. Pre-empting the Issue of Preventative Self-Defence VI. Additional Support for a Different Interpretation of Armed Attack VII. Conclusion 5 THE ICJ: ROLES AND RESTRICTIONS I. Non-appearance A. Non-appearance in Nicaragua B. Non-appearance in Use of Force Disputes Generally II. The Underlying Roles of the ICJ A. The Settlement of Disputes through the Application of Existing Law B. The Development of International Law C. Is the Development of the Law Desirable? III. Politicisation and Decision-Making A. The Hive Mind Fallacy B. Judicial Bias and Politicisation C. Dworkinian 'Principles' and Decision-Making IV. The Suitability of the ICJ for Dealing with Use of Force Issues A. The Justiciability of 'Political' Disputes and the Separation of Powers B. The Need for a Legal Approach C. Evidence-Gathering V. Consent and the Limited Number of Self-Defence Cases VI. Consent and Partial Jurisdiction VII. Conclusion CONCLUSION