International Courts and the Performance of International Agreements: A General Theory with Evidence from the European Union 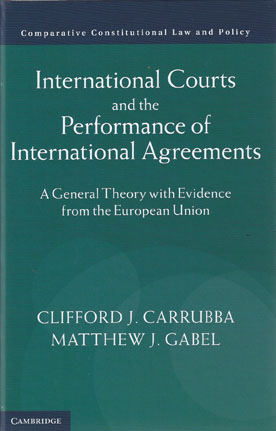 This book proposes a general theory of international courts that assumes a court has no direct power over national governments. Member states are free to ignore both the international agreement and the rulings by the court created to enforce that agreement. The theory demonstrates that such a court can, in fact, facilitate cooperation with international law, but only within important political constraints.

The authors examine the theoretical argument in the context of the European Union. Using an original data set of rulings by the European Court of Justice, they find that the disposition of court rulings and government compliance with those rulings comport with the theory's predictions.

Contents:
1. Introduction: international courts and compliance
2. A theory of courts and compliance in international law
3. The empirical relevance of the theoretical model: evaluating the hypotheses in the European Union context
4. Preliminary considerations on testing the political-sensitivity hypothesis: designing a control for the legal merits
5. A test of the political-sensitivity hypothesis
6. A test of the conditional-effectiveness hypothesis: the European Court of Justice and economic integration
7. Conclusion.