Radical Deprivation on Trial: The Impact of Judicial Activism on Socioeconomic Rights in the Global South 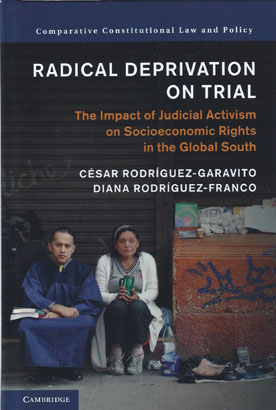 This book is an empirical study of contributions by courts in the Global South to comparative constitutionalism.

It offers an analytical and comparative framework for understanding these constitutional innovations and illustrates them with a detailed qualitative study of the most ambitious case in constitutional adjudication in Latin America over the last decade: the Colombian Constitutional Court's structural injunction affecting the rights of over four million internally displaced people (IDPs) in Colombia, and its implementation process.

While the ruling (known as T-025 in Colombia) was handed down in 2004, its monitoring process continues to this day. This book traces the case's evolution over the last ten years from its origin to its effects on law, policy, politics, and public opinion.

The far-reaching insights from this case study will be of interest to scholars of comparative constitutionalism as well as leading constitutional courts in Latin America, Africa, and Asia.