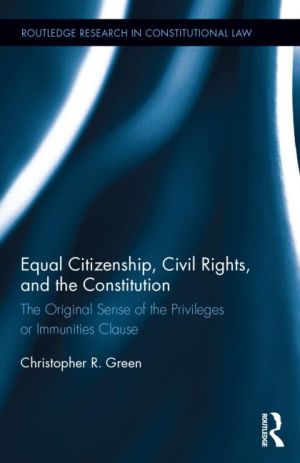 The Privileges or Immunities Clause of the Fourteenth Amendment is arguably the most historically important clause of the most significant part of the US Constitution. Designed to be a central guarantor of civil rights and civil liberties following Reconstruction, this clause could have been at the center of most of the country's constitutional controversies, not only during Reconstruction, but in the modern period as well; yet for a variety of historical reasons, including precedent-setting narrow interpretations, the Privileges or Immunities Clause has been cast aside by the Supreme Court. This book investigates the Clause in a textualist-originalist manner, an approach increasingly popular among both academics and judges, to examine the meanings actually expressed by the text in its original context.

Arguing for a revival of the Privileges or Immunities Clause, author Christopher Green lays the groundwork for assessing the originalist credentials of such areas of law as school segregation, state action, sex discrimination, incorporation of the Bill of Rights against states, the relationship between tradition and policy analysis in assessing fundamental rights, and the Fourteenth Amendment rights of corporations and aliens. Thoroughly argued and historically well-researched, this book demonstrates that the Privileges or Immunities Clause protects liberty and equality, and it will be of interest to legal academics, American legal historians, and anyone interested in American constitutional history.