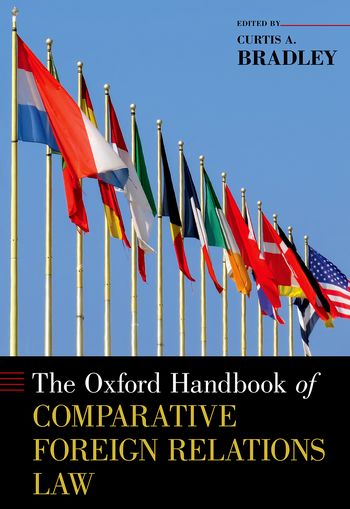 Edited by: Curtis A. Bradley

This Oxford Handbook ambitiously seeks to lay the groundwork for the relatively new field of comparative foreign relations law.

Comparative foreign relations law compares and contrasts how nations, and also supranational entities (for example, the European Union), structure their decisions about matters such as entering into and exiting from international agreements, engaging with international institutions, and using military force, as well as how they incorporate treaties and customary international law into their domestic legal systems.

The legal materials that make up a nation's foreign relations law can include constitutional law, statutory law, administrative law, and judicial precedent, among other areas.

This book consists of 46 chapters, written by leading authors from around the world. Some of the chapters are empirically focused, others are theoretical, and still others contain in-depth case studies. In addition to being an invaluable resource for scholars working in this area, the book should be of interest to a wide range of lawyers, judges, and law students.

Foreign relations law issues are addressed regularly by lawyers working in foreign ministries, and globalization has meant that domestic judges, too, are increasingly confronted by them. In addition, private lawyers who work on matters that extend beyond their home countries often are required to navigate issues of foreign relations law. An increasing number of law school courses in comparative foreign relations law are also now being developed, making this volume an important resource for students as well.

Comparative foreign relations law is a newly emerging field of study and teaching, and this volume is likely to become a key reference work as the field continues to develop.