The Oxford Handbook of EU Law 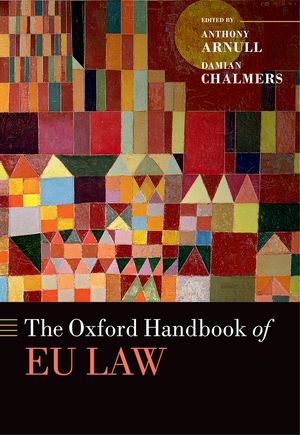 Since its formation the European Union has expanded beyond all expectations, and this expansion seems set to continue as more countries seek accession and the scope of EU law expands, touching more and more aspects of its citizens' lives. The EU has never been stronger and yet it now appears to be reaching a crisis point, beset on all sides by conflict and challenges to its legitimacy. Nationalist sentiment is on the rise and the Eurozone crisis has had a deep and lasting impact. EU law, always controversial, continues to perplex, not least because it remains difficult to analyse. What is the EU? An international organization, or a federation? Should its legal concepts be measured against national standards, or another norm?

The Oxford Handbook of EU Law illuminates the richness and complexity of the debates surrounding the law and policies of the EU. Comprising eight sections, it examines how we are to conceptualize EU law; the architecture of EU law; making and administering EU law; the economic constitution and the citizen; regulation of the market place; economic, monetary, and fiscal union; the Area of Freedom, Security, and Justice; and what lies beyond the regulatory state. Each chapter summarizes, analyses, and reflects on the state of play in a given area, and suggests how it is likely to develop in the foreseeable future. Written by an international team of leading commentators, this Oxford Handbook creates a vivid and provocative tapestry of the key issues shaping the laws of the European Union.

Contents:
PART I: CONCEPTUALIZING EU LAW
1. The Philosophy of European Union Law
2. Legal Reasoning in EU Law
3. Straddling the Fence: The EU and International Law
PART II: THE ARCHITECTURE OF EU LAW
4. EU Competences: Existence and Exercise
5. Legal Acts and Hierarchy of Norms in EU Law
6. Accession and Withdrawal in the Law of the European Union
7. The Court of Justice of the European Union
8. Primacy and the National Reception
9. Direct Effect, Effective Judicial Protection, and State Liability
10. Human Rights in the EU
11. Common External Policies: Common Commercial Policy, Common Foreign and Security Policy, Common Security and Defence Policy
PART III: MAKING AND ADMINISTERING EU LAW
12. The Democratic Ambiguity of EU Law-Making and its Enemies
13. Comitology
14. The Evolution of Infringement and Sanction Procedures: Of Pilots, Diversions, Collisions, and Circling
15. Judicial Review in the European Union
16. Dialogue with National Courts
17. Accountability and Representation in EU Law
PART IV: THE ECONOMIC CONSTITUTION AND THE CITIZEN
18. The Free Movement of Workers in the 21st Century
19. The Developing Legal Dimensions of Union Citizenship
20. Goods
21. Establishment
22. The Law on the Free Movement of Services: Powerful, but not always Persuasive
PART V: REGULATION OF THE MARKET PLACE
23. The Complex Weave of Harmonization
24. Competition and Merger Law and Policy
25. Competition Law Enforcement
26. An Evolutionary Theory of State Aid Control
27. EU Intellectual Property: Exercises in Harmonization
PART VI: ECONOMIC, FISCAL, AND MONETARY UNION
28. The Metamorphosis of European Economic and Monetary Union
29. Financial Markets Regulation
30. Death, Taxes, and (Targeted) Judicial Dynamism: The Free Movement of Capital in EU Law
31. Direct Taxation and the Fundamental Freedoms
PART VII: THE AREA OF FREEDOM, SECURITY, AND JUSTICE
32. EU Criminal Law under the Area of Freedom, Security, and Justice
33. EU Migration and Asylum Law under the Area of Freedom, Security, and Justice
34. The Harmonization of Civil Jurisdiction
PART VIII: BEYOND THE REGULATORY STATE?
35. Pursuing Equality in the EU
36. The EU and National Systems of Labour Law
37. Welfare Policy and Social Inclusion
38. Experts and Publics in EU Environmental Law