The Oxford Handbook of the Law of the Sea (eBook) 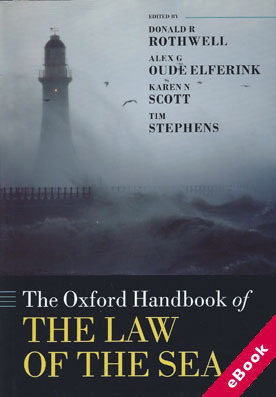 
ISBN13: 9780191024658
Published: March 2015
Publisher: Oxford University Press
Country of Publication: UK
Format: eBook (ePub)
Price: £33.32
The amount of VAT charged may change depending on your location of use.
Convert Currency

Human activities have taken place in the world's oceans and seas for most of human history. With such a vast number of ways in which the oceans can be used for trade, exploited for natural resources and fishing, as well as concerns over maritime security, the legal systems regulating the rights and responsibilities of nations in their use of the world's oceans have long been a crucial part of international law.

The United Nations Convention on the Law of the Sea comprehensively defined the parameters of the law of the sea in 1982, and since the Convention was concluded it has seen considerable development.

This Oxford Handbook provides a comprehensive and original analysis of its current debates and controversies, both theoretical and practical. Written by over forty expert and interdisciplinary contributors, the Handbook sets out how the law of the sea has developed, and the challenges it is currently facing. The Handbook consists of forty chapters divided into six parts.

First, it explains the origins and evolution of the law of the sea, with a particular focus upon the role of key publicists such as Hugo Grotius and John Selden, the gradual development of state practice, and the creation of the 1982 UN Convention. It then reviews the components which comprise the maritime domain, assessing their definition, assertion, and recognition. It also analyses the ways in which coastal states or the international community can assert control over areas of the sea, and the management and regulation of each of the maritime zones. This includes investigating the development of the mechanisms for maritime boundary delimitation, and the decisions of the International Tribunal for the Law of the Sea.

The Handbook also discusses the actors and intuitions that impact on the law of the sea, considering their particular rights and interests, in particular those of state actors and the principle law of the sea institutions. Then it focuses on operational issues, investigating longstanding matters of resource management and the integrated oceans framework. This includes a discussion and assessment of the broad and increasingly influential integrated oceans management governance framework that interacts with the traditional law of the sea.

It considers six distinctive regions that have been pivotal to the development of the law of the sea, before finally providing a detailed analysis of the critical contemporary issues facing the law of the sea. These include threatened species, climate change, bioprospecting, and piracy. The Handbook will be an invaluable and thought-provoking resource for scholars, students, and practitioners of the law of the sea.