The Oxford Handbook of the Indian Constitution 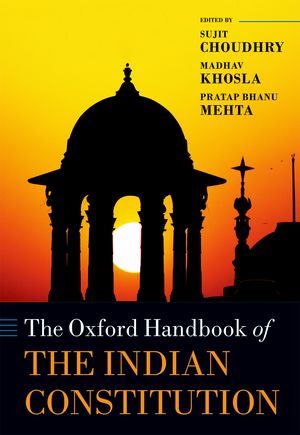 The Indian Constitution is one of the world's longest and most important political texts. Its birth, over six decades ago, signalled the arrival of the first major post-colonial constitution and the world's largest and arguably most daring democratic experiment. Apart from greater domestic focus on the Constitution and the institutional role of the Supreme Court within India's democratic framework, recent years have also witnessed enormous comparative interest in India's constitutional experiment.

The Oxford Handbook of the Indian Constitution is a wide-ranging, analytical reflection on the major themes and debates that surround India's Constitution. The Handbook provides a comprehensive account of the developments and doctrinal features of India's Constitution, as well as articulating frameworks and methodological approaches through which studies of Indian constitutionalism, and constitutionalism more generally, might proceed. Its contributions range from rigorous, legal studies of provisions within the text to reflections upon historical trends and social practices. As such the Handbook is an essential reference point not merely for Indian and comparative constitutional scholars, but for students of Indian democracy more generally.