The Oxford Handbook of Biblical Law 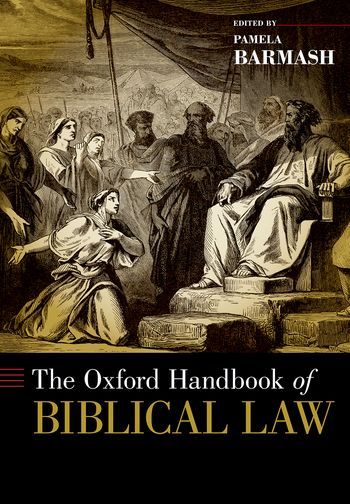 Major innovations have occurred in the study of biblical law in recent decades. The legal material of the Pentateuch has received new interest with detailed studies of specific biblical passages. The comparison of biblical practice to ancient Near Eastern customs has received a new impetus with the concentration on texts from actual ancient legal transactions.

The Oxford Handbook of Biblical Law provides a state of the art analysis of the major questions, principles, and texts pertinent to biblical law. The thirty-three chapters, written by an international team of experts, deal with the concepts, significant texts, institutions, and procedures of biblical law; the intersection of law with religion, socio-economic circumstances, and politics; and the reinterpretation of biblical law in the emerging Jewish and Christian communities. The volume is intended to introduce non-specialists to the field as well as to stimulate new thinking among scholars working in biblical law.

Contents:
Introduction
Legal Institutions and Fundamental Concepts
Covenant
Social Justice
Offences Against Human Beings in Public and Private Law
Litigation: Trial Procedure, Jurisdiction, Evidence, Testimony
Women, Children, Slaves, and Foreigners
Ritual Law: Sacrifice and Holy Days
Ritual Law: Priests, Purity, and the Sanctuary
"An Eye for an Eye and Capital Punishment
Legal Texts of the Bible
The Decalogue
The Book of the Covenant
The Priestly Law
The Holiness Legislation
The Deuteronomic Reform
Law and Narratives
Determining the Date of the Legal Texts of the Hebrew Bible
Law in the Canon of the Hebrew Bible
The Role of Law in the Formation of the Pentateuch and the Canon
The Law and the Prophets
Law and the Wisdom Tradition
The Legacy of the Ancient Near East Context of Biblical Law
Law Collections and Legal Forms and Institutions
Ancient Near Eastern Treaties and Biblical Law
The Pre-Exilic Monarchy and the Law
Law in the Persian Period
The Late Second Temple Period and Beyond — Reflections on Biblical Law Within Emerging Jewish Communities
Law in the Late Second Temple Period in the Dead Sea Scrolls, and in Intertestamental and Diaspora Sources
Judaism and Christianity: Diverging Paths in the Centuries after the Destruction of the Second Temple
The Bible and the Sources of Rabbinic Law
The Law and the Gospels, with Attention to the Relationship Between the Decalogue and the Sermon on the Mount/Plain
Ethics and Moral Duties in Jewish Law
Paul and the Covenant
Rabbinic Law
Ritual Law in Rabbinic Judaism
Women, Children, and Slaves in Jewish Law
Women, Children, Slaves, and the Law in the New Testament Period
Social Justice in Early Christianity
Social Justice in Rabbinic Judaism