The Oxford Handbook of Gender, Sex, and Crime (eBook) 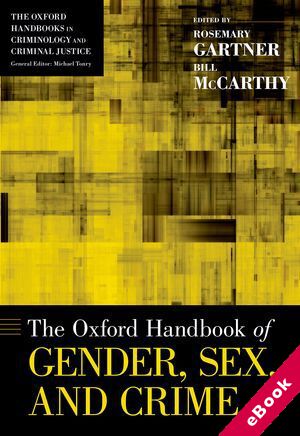 
ISBN13: 9780199397297
Published: June 2014
Publisher: Oxford University Press
Country of Publication: UK
Format: eBook (ePub)
Price: £27.49
The amount of VAT charged may change depending on your location of use.
Convert Currency

Research on gender, sex, and crime today remains focused on topics that have been a mainstay of the field for several decades, but it has also recently expanded to include studies from a variety of disciplines, a growing number of countries, and on a wider range of crimes. The Oxford Handbook of Gender, Sex, and Crime reflects this growing diversity and provides authoritative overviews of current research and theory on how gender and sex shape crime and criminal justice responses to it. The editors, Rosemary Gartner and Bill McCarthy, have assembled a diverse cast of criminologists, historians, legal scholars, psychologists, and sociologists from a number of countries to discuss key concepts and debates central to the field.

The Handbook includes examinations of the historical and contemporary patterns of women's and men's involvement in crime; as well as biological, psychological, and social science perspectives on gender, sex, and crimal activity. Several essays discuss the ways in which sex and gender influence legal and popular reactions to crime. An important theme throughout The Handbook is the intersection of sex and gender with ethnicity, class, age, peer groups, and community as influences on crime and justice. Individual chapters investigate both conventional topics - such as domestic abuse and sexual violence - and topics that have only recently drawn the attention of scholars - such as human trafficking, honor killing, gender violence during war, state rape, and genocide.

The Oxford Handbook of Gender, Sex, and Crime offers an unparalleled and comprehensive view of the connections among gender, sex, and crime in the United States and in many other countries. Its insights illuminate both traditional areas of study in the field and pathways for developing cutting-edge research questions.