The Oxford Handbook of English Law and Literature, 1500-1700 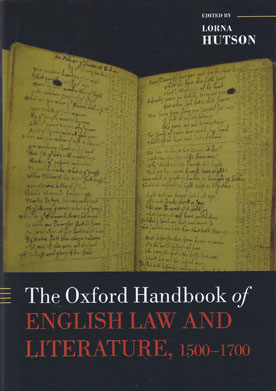 This Handbook triangulates the disciplines of history, legal history, and literature to produce a new, interdisciplinary framework for the study of early modern England.

Scholars of early modern English literature and history have increasingly found that an understanding of how people in the past thought about and used the law is key to understanding early modern familial and social relations as well as important aspects of the political revolution and the emergence of capitalism.

Judicial or forensic rhetoric has been shown to foster new habits of literary composition (poetry and drama) and new processes of fact-finding and evidence evaluation. In addition, the post-Reformation jurisdictional dominance of the common law produced new ways of drawing the boundaries between private conscience and public accountability.

Accordingly, historians, critics and legal historians come together in this Handbook to develop accounts of the past that are attentive to the legally purposeful or fictional shaping of events in the historical archive. They also contribute to a transformation of our understanding of the place of forensic modes of inquiry in the creation of imaginative fiction and drama.