Freedom of Establishment and Private International Law for Corporations (eBook) 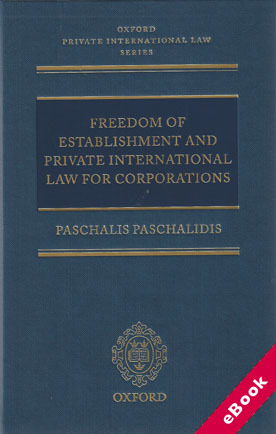 
ISBN13: 9780191638138
Published: March 2012
Publisher: Oxford University Press
Country of Publication: UK
Format: eBook (ePub)
Price: £135.42
The amount of VAT charged may change depending on your location of use.
Convert Currency

Freedom of establishment is one of the four fundamental freedoms of the European Union. The principle is that natural persons who are European Union Citizens, and legal entities formed in accordance with the law of a Member State and having its registered office, central administration or principal place of business within the EU, may take up economic activity in any Member State in a stable and continuous form regardless of nationality or mode of incorporation.

This book examines the way in which EU law has influenced how national courts in Europe assert jurisdiction in cross-border corporate disputes and insolvencies, and the mechanism which allows them to decide which national law should apply to the substance of the dispute. The book also considers the potential for EU Member States to compete for devising national corporate and insolvency legislation that will attract incorporations or insolvencies.

Central to the book is the concept of national choice of law. In considering the impact of freedom of establishment on private international law for corporations, the book uniquely analyses both corporate and insolvency law together, presenting the topic in the broadest possible sense.

Importantly, the doctrine of abuse in corporate and insolvency law is covered, raising the question of 'forum shopping' and regulatory competition which underpins the intersection between freedom of establishment and private international law. Through examination of the most recent and leading judgments of the European Court of Justice in Centros and Cadbury Schweppes, the book derives certain conclusions as to the operation of the doctrine of abuse and the limits thereof in the context of freedom of establishment.

Being the first in the field to examine the leading ECJ cases of Inspire Art, Sevic and Cartesio regarding the real seat doctrine, the book makes the judgment that there is no incompatibility as such between the doctrine and the freedom of establishment.

Ultimately, the book analyses to what extent diversity in the corporate and insolvency laws of the Member States should be preserved, so as to encourage competition between jurisdictions in Europe.