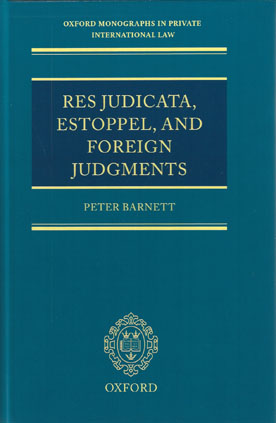 This clear and original book provides a much-needed analysis of the doctrines of res judicata and abuse of process as applied to foreign judgments recognized in England for their preclusive effect. In particular, it examines the four preclusive pleas which are encountered in practice, namely: (i) cause of action estoppel; (ii) issue estoppel; (iii) former recovery per section 34 of the Civil Jurisdiction and Judgments Act 1982; and (iv) the rule in Henderson v Henderson.

Although the complex and technical doctrines of res judicata and abuse of process are well known in the context of domestic judicial decisions, little has hitherto been written analysing how these doctrines apply when the judgment emanates from a foreign court. It is not surprising, therefore, that this area of law has been frequently confused and mis-applied. And yet the recognition of foreign judgments for preclusive purposes is an increasingly important area for practitioners and academics - especially for those interested in international commercial litigation, and not least given the important treaty developments that are occurring. For these reasons, this book is a very timely work.

Written with a practitioner focus, it includes extensive references to res judicata authorities in the United Kingdom, Australia and Canada.