Choice-of-Court Agreements Under the European and International Instruments: The Revised Brussels I Regulation, the Lugano Convention, and the Hague Convention 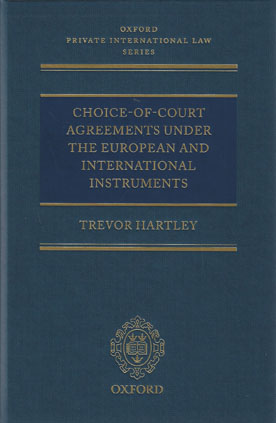 This is the first text to address all the instruments that will govern choice-of-court agreements in Europe and to engage in a practical discussion of their mutual relationship.

The existing common law, which has dominated discussion of this subject for so long, will become less significant as European and international instruments become more widely applicable. The consequences of this, both for practitioners and business persons engaging in international transactions, are explained by thematic chapters covering all major issues affected.

The work opens with an introduction to the components of a choice-of-court agreement and to the origins, principles, and status of the various instruments, making the text accessible to a broad practitioner audience. The scope of the instruments - territorial application, international application and subject-matter application - as well as conflicts between them, are addressed in Part II, which is devoted to guidance on deciding which instrument applies.

Comprehensive appendices follow, including the Hague Convention 2005 in its entirety, alongside extracts from Brussels I and Lugano, making this a standalone support for any practitioner facing unfamiliar questions in the area.

Contents:
INTRODUCTION
1. Introduction
WHICH INSTRUMENT?
2. Territorial Application
3. From what date do the instruments apply?
4. Subject-matter scope
5. International Scope
6. Conflict of Instruments
VALIDITY AND EFFECT
7. Validity of Choice-of-Court Agreements
8. Effects of Choice-of-Court Agreements
9. Recognition and enforcement of judgments
10. Remedies and Procedure
11. Concurrent proceedings
SPECIAL TOPICS
12. Insurance
13. Consumer contracts under Brussels and Lugano
14. Individual contracts of employment under Brussels and Lugano
15. Immovable Property
16. Companies
17. Intellectual Property
Selected provisions from the Brussels Convention, the Brussels 1 Regulation and the Lugano Convention
APPENDICES
Choice-of-court provisions in the Brussels Convention, Brussels 2000, Brussels 2012, the Lugano Convention of 1988 and the Lugano Convention of 2007
Brussels 2012: Text of the Regulation
Hague: Text of the Convention and Hartley/Dogauchi Report
Extracts from Nygh/Pocar Report