Agreements on Jurisdiction and Choice of Law 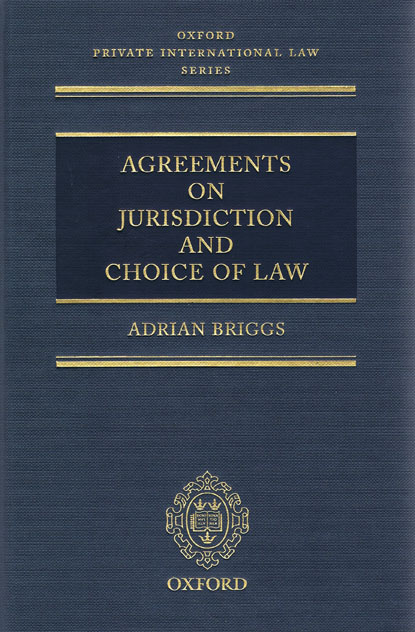 In this book, the author analyses the law and practice relating to the classification, drafting, validity and enforcement of contracts relating to jurisdiction and choice of law. The focus is on English law, EU law and common law measures, but there is also some comparative material built in. The book will be useful in particular to practising lawyers seeking to draft, interpret or enforce the types of contract discussed, but the in-depth discussion will also be valuable to academic lawyers specialising in private international law.

Written by an academic who is also a practising barrister, this book gives in-depth coverage of how the instruments and principles of private international law can be used for the resolution of cross-border or multi-jurisdictional disputes. It examines the operation and application of the Brussels Regulation, the Rome Convention and the Hague Convention on Exclusive Choice of Court Agreements in such disputes, but also discusses the judgments and decisions of the courts in significant cases such as Turner v Grovit, Union Discount v Zoller, and De Wolf v Cox.

Much of the book is given over to practical evaluation of how agreements on jurisdiction and choice of law should be put together, with guidance on, amongst other things, drafting of the agreements (including some sample clauses), severability of agreements, consent, and the resolution of disputes by arbitration.

Contents:
1. Introduction and Scheme
Introduction
Advance conclusions
Terms and elements
A snapshot from 2007
Scheme
2. Consent in private international law
The general principle
The role of consent in commercial law
Consent or agreement, and the absence of consent or agreement
Consent in the application of foreign law
Consent in choice of law
Consent in the recognition of foreign judgments
Consent and the personal jurisdiction of the court
Consent and the subject-matter jurisdiction of the court
European jurisdiction
3. Dispute resolution and severability
Contractual terms
The nature of agreements for the resolution of disputes
Contractual agreements on jurisdiction
Separate natures, or severable agreements
The path to the principle of severability
Validity and severability: jurisdiction agreements
The obverse of severability
The agreement on choice of law as part of the severable agreement
The strength and weakness of agreement as an organising principle
i Divergence on the existence of a contract
ii Divergence on the content of the bargain
Assumptions and conclusions
4. Clauses, principles, and interpretation
The range and varieties of jurisdiction clause
Jurisdiction clauses: rights conferred and duties assumed
Jurisdiction agreements as exemption clauses
The scope of the duty; the ambit of the clause
Service of suit clauses
Combined arbitration and jurisdiction agreements
Choice of law clauses
One contract but several agreements
The role of European law
5. Drafting agreements
Drafting by specimen
Contractual variation of the Brussels Regulation
A specimen clause: elaborate version
Explanation of contents: elaborate version
A specimen clause: simple version
Drafting by incorporation from other documents
The meaning of words and the use of authority
i Subject matter: 'this contract', 'this agreement'
ii Prepositions, connections, and the terminology of relationship
6. Jurisdiction agreements: primary obligations
Jurisdiction-blind enforcement
Development of the anti-suit injunction
Objections to enforcement by order of the English court
Equitable maxims as restriction on remedy
The position of strangers to the contract
Stays of English proceedings brought in breach of contract
7. Jurisdiction agreements: Brussels Regulation
The context in which Article 23 is to operate
The structure of Article 23
The conclusiveness or inconclusiveness of writing
What is an agreement for the purposes of Article 23 ?
Unilateral or bilateral agreement
Article 23: what writing ? whose writing ?
The parties to the particular legal relationship
Formal alternatives to writing which satisfy Article 23
Article 23 and those who depart from the agreement
Injunctions to enforce agreements about jurisdiction and litigation
Turner v Grovit
How persuasive ? The burden of proof
The particular legal relationship
Clarifying the wording: the United Kingdom
Jurisdiction agreements for the courts of non-Member States
Conclusions
8. Jurisdiction agreements: secondary obligations
The starting points of the common law
Union Discount v Zoller and five cases which are less straightforward
Other issues arising within the common law analysis
i The cause of action
ii The assessment of damages
iii Where the nominated court is not in England
Judgments from the courts of a Member State
9. Foreign Judgments
Common law recognition
Judgments from the court designated by a dispute resolution agreement
Foreign judgments obtained in breach of jurisdiction agreement
Overcoming foreign judgments obtained in breach of contract
Recognition and enforcement under the Regulation
The decision in De Wolf v Cox
Recognition and enforcement at the margin of the Regulation
International obligations binding courts; personal obligations binding parties;
10. Agreements on choice of law
Contracts: where the existence of the contract is not in dispute
Contracts: where the existence of the contract is in dispute
Contracts: the law which governs the consequences of contractual invalidity
Contracts: conclusions about the nature of choice of law for contracts
Agreements of choice of law and claims in tort
Choice of law and property rights
11. Giving effect to agreements on choice of law
Introduction
The common law and the proper law of a contract
Choice of proper law: common intention or mutual agreement?
Governing the contract and governing contractual litigation
The consequence if the law identified for application is not applied
i Breach of a choice of law
ii Non-monetary responses
iii Monetary remedies
iv Subverting the contract as a tortious wrong
v The Rome Convention
Impermissible choices of law: secondary consequences
The alternative: careful drafting
i Promising to pay
ii Adapting the undertaking in damages
12. Agreements to resolve disputes by arbitration
Preliminary questions and practical answers
Who will adjudicate ? Who decides who will adjudicate ?
Another view
To what do the parties agree when they agree to arbitration ?
The jurisdiction of the courts of the seat
Foreign judgments in breach of arbitration agreement: Brussels Regulation
i Non-recognition of judgments
ii Reversal of judgments
iii Private rights and public duties
Foreign proceedings in breach of agreement to arbitrate: Brussels Regulation
The New York Convention
Damages for breach of the contract to proceed by way of arbitration
The problem of excessive supervision
13. Conclusions
The relative effect of agreements on the resolution of disputes
The Hague Convention on Exclusive Choice of Court Agreements
Reprise: private international law and party autonomy