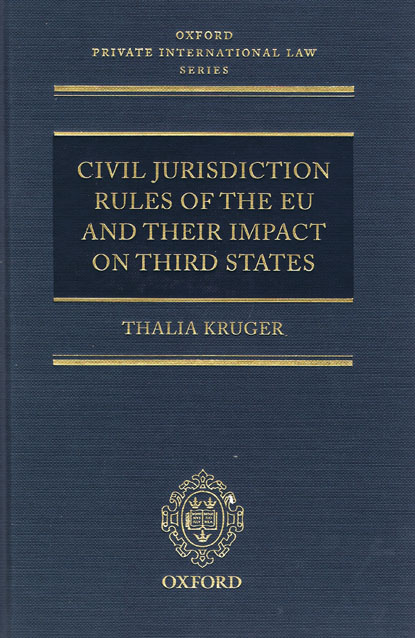 Over the past few years the European Community has been active in establishing rules of civil jurisdiction. This book provides a comprehensive treatment of the three main instruments for implementing these rules: Brussels I (covering jurisdiction in civil and commercial matters), Brussels IIbis (jurisdiction in matters of divorce and parental responsibility) and the Insolvency Regulation. The Regulations were drawn up from the point of view of the European Community and the facilitation of co-operation between the Member States. However, legal practice shows that disputes, whether of a commercial or family nature, are not always neatly restricted to being either within the competence of the EU, or entirely outside the EU. When a single dispute might fall into the jurisdiction of either EU Member States or third States, the exact scope of application of the Regulations is uncertain.

This book covers the background and development of civil jurisdiction rules in the European Union, analysing the three main regulations on civil jurisdiction, and the effect that the application of these rules has on parties domiciled or habitually resident outside the EU, particularly with regard to the recognition and enforcement of judgments made within the EU in external jurisdictions. There is analysis of case law and practical problems which have arisen, or might arise, in disputes where there is a conflict of laws between an EU Member State and a third State, for example involving the rules of the domicile of the defendant, exclusive jurisdiction, forum clauses, and procedural rules such as forum non conveniens and lis pendens.

It will also examine the external competences of the European Community in the field of civil jurisdiction with regard to the ECJ Lugano Opinion and the far-reaching implications of this ruling for possible future conventions, both for the EU and for third states who will now have to negotiate with the European Community as a whole, and not with a collection of states.