Conflict of Laws and Arbitral Discretion: The Closest Connection Test 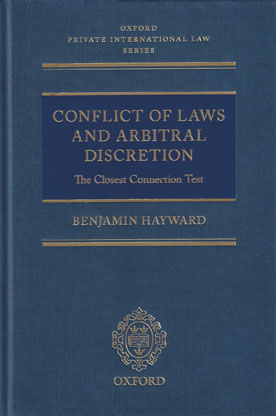 Arbitration is the dispute resolution method of choice in international commerce, but it rests on a complex legal foundation.

In many international commercial contracts, the parties will choose the law governing any future disputes. However, where the parties do not choose a governing law, the prevailing approach in arbitration is to afford arbitrators broad and largely unfettered discretion to choose the law considered most appropriate or most applicable.

The uncertainty resulting from this discretion potentially affects the parties' rights and obligations, the performance of their contract, the presentation of their cases, and negotiations undertaken to settle their disputes.

In this text, Dr Benjamin Hayward critically reviews the prevailing approach to the conflict of laws in international commercial arbitration. The text adopts a focused and detail-oriented analysis - being based on a study of more than 130 sets of arbitral laws and rules from around the world, and drawing heavily on arbitral case law.

Nevertheless, it remains both practical and accessible, taking as its focus the needs and expectations of commercial parties, who are the ultimate users of international commercial arbitration. This text identifies the difficulties that result from resolving conflicts of laws through broad and unconstrained arbitral discretions. It establishes that a bright-line test would be a preferable way to resolve arbitral conflicts of laws.

Specifically, it recommends a modified Article 4 Rome Convention rule as the ideal basis for law reform in this area of arbitral procedure.