Treaties on Transit of Energy via Pipelines and Countermeasures 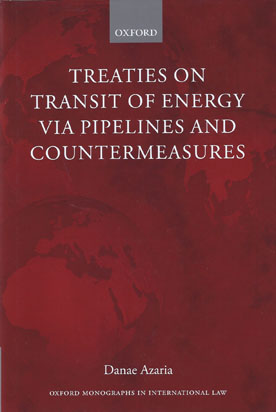 The importance of the relationship between treaties providing for uninterrupted energy transit and customary international law is starkly demonstrated by the relationship between the relevant treaties and countermeasures under the law of international responsibility, as a means of enforcing the transit state's obligations, and as circumstances that preclude the wrongfulness of the transit state's interruptions of energy transit.

This monograph undertakes a comprehensive analysis of and provides a coherent method for establishing obligations governing the transit of energy through pipelines in multilateral and bilateral treaties, including the WTO Agreement, Energy Charter Treaty, and fourteen bespoke pipeline treaties. It examines whether breach of these treaties can give rise to countermeasures by thoroughly engaging with the law of treaties, especially treaty interpretation.

The book offers an original argument about the nature of these treaty obligations in relation to state responsibility, and about the relationship between provisions for dispute settlement and compliance supervision in transit treaties and countermeasures. The analysis is placed in the historical and normative landscape of freedom of transit in international law, and after setting out the obligations' content and distinguishing countermeasures from treaty law responses, the book identifies a trend towards the multilateralisation of obligations and their institutional equipment.

Building on these findings the work explains the availability and lawfulness of countermeasures against the responsible transit state. The competing interests of the transit state and those of the states dependent on the pipeline, as well as the states' interpretations of treaty rules and their relationship with international responsibility in numerous disputes, make this question one of the most controversial aspects of modern energy law.

Contents:
1. Introduction
2. The Historical and Normative Background of Freedom of Transit in International Law
3. The Scope and Content of Obligations Regarding Transit of Energy
4. The Nature of International Obligations Regarding Transit of Energy: From Bilateral to Indivisible Obligations
5. Treaty Law Responses
6. Treaty Obligations in Respect of Settlement of Disputes
7. Countermeasures against the Responsible Transit State
8. Countermeasures as Circumstances Precluding Wrongfulness of Interruptions of Established Transit Flows of Energy
9. Conclusion: A Trend against Unilateralism