A Contemporary Concept of Monetary Sovereignty 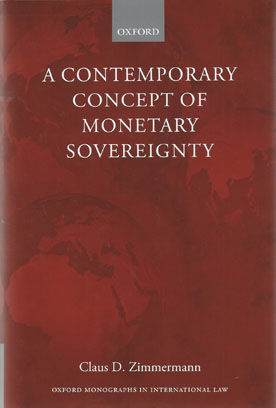 Monetary sovereignty is a crucial legal concept dictating that states have sovereignty over their own monetary and fiscal affairs. However, it does not feature as part of any key instruments of international law, including the Articles of Agreement of the International Monetary Fund.

Rather, it has remained a somewhat separate notion, developed from an assertion of the former Permanent Court of International Justice in 1929. As a consequence of globalization and increasing financial integration, promoted by organizations such as the European Union and the International Monetary Fund, the principle of monetary sovereignty has undergone significant change.

This book examines this evolution in detail, and provides a conceptual framework to demonstrate what this means for the legal and economic challenges facing the international community. The book examines the origins and evolution of the concept of monetary sovereignty, putting it into the context of broader concepts of sovereignty. It argues that monetary sovereignty remains relevant as a dynamic legal concept with both positive and normative components.