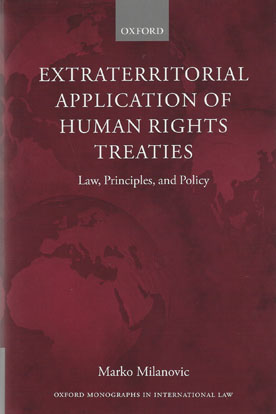 Questions as to when a state owes obligations under a human rights treaty towards an individual located outside its territory are being brought more and more frequently before both international and domestic courts.

Victims of aerial bombardment, inhabitants of territories under military occupation, deposed dictators, suspected terrorists detained in Guantanamo by the United States, and the family of a former KGB spy who was assassinated in London through the use of a radioactive toxin, allegedly at the orders or with the collusion of the Russian government - all of these people have claimed protection from human rights law against a state affecting their lives while acting outside its territory. These matters are extremely politically and legally sensitive, leading to much confusion, ambiguity and compromise in the existing case law.

This study attempts to clear up some of this confusion, and expose its real roots. It examines the notion of state jurisdiction in human rights treaties, and places it within the framework of international law. It is not limited to an inquiry into the semantic, ordinary meaning of the jurisdiction clauses in human rights treaties, nor even to their construction into workable legal concepts and rules.

Rather, the interpretation of these treaties cannot be complete without examining their object and purpose, and the various policy considerations which influence states in their behaviour, and courts in their decision-making. The book thus exposes the tension between universality and effectiveness, which is itself the cause of methodological and conceptual inconsistency in the case law.

Finally, the work elaborates on the several possible models of the treaties' extraterritorial application. It offers not only a critical analysis of the existing case law, but explains the various options that are before courts and states in addressing these issues, as well as their policy implications.