The International Minimum Standard and Fair and Equitable Treatment 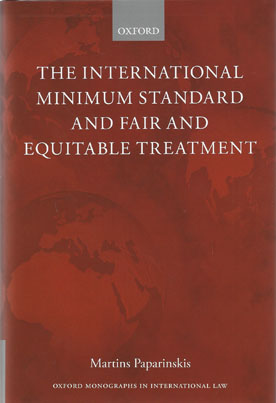 Investment protection treaties generally provide for the obligation to treat investments fairly and equitably, even if the wording of the rule and its relationship with the customary international standard may differ.

The open-textured nature of the rule, the ambiguous relationship between the vague treaty and equally vague customary rules, and States' interpretations of the content and relationship of both rules (not to mention the frequency of successful invocation by investors) make this issue one of the most controversial aspect of investment protection law.

This monograph engages in a comprehensive analysis of the relationship between the international minimum standard and fair and equitable treatment. It provides an original argument about the historical development of the international standard, a normative rationale for reading it into the treaty rules of fair and equitable treatment, and a coherent methodology for establishing the content of this standard.

The first part of this book untangles the history of both the international minimum standard and fair and equitable treatment. The second part addresses the normative framework within which the contemporary debate takes place. After an exhaustive review of all relevant sources, it is argued that the most persuasive reading of fair and equitable treatment is that it always makes a reference to customary law.

The third part of the book builds on the historical analysis and the normative framework, explaining the content of the contemporary standard by careful comparative human rights analysis.