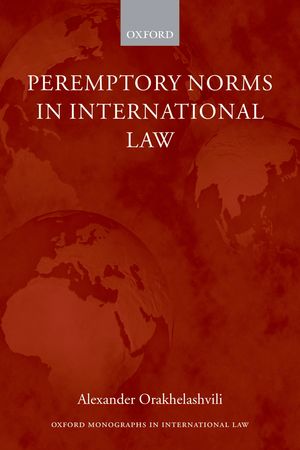 This monograph analyses the questions raised by the legal effects of peremptory norms of international law (jus cogens). A comprehensive study of this problem has been lacking so far in international legal doctrine. Peremptory norms, although often criticised and even more often approached with sceptical nihilism, nevertheless attract growing doctrinal and practical attention and have increasing importance in determining the permissible limits on the action of State and non-State actors in different areas. In view of this overriding impact on what might otherwise be instances of the law-making process, peremptory norms concern a constitutional aspect of international law.

This fresh effort to examine and explain the phenomenon of peremptory norms in key areas fills an important doctrinal gap through presenting in a systematic way the effects of peremptory norms and reappraising the significance of such effects, bearing in mind their overall nature. It also demonstrates that the hierarchical superiority of peremptory norms is not limited to the sphere of primary legal relations but becomes most crucially relevant after a specific peremptory norm is breached. A norm's peremptory character is relevant not only for its substance but also for its consequences; peremptoriness consists primarily in the capacity to impact through its effects upon conflicting acts, situations and agreements.