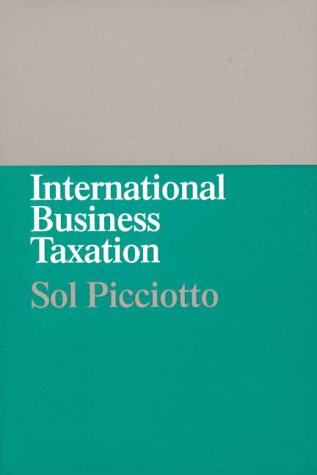 Publication Abandoned
In the 20th century the application of national taxes to income from international business has created complex yet fascinating issues. The co-ordination of national jurisdiction to tax international income has rested formally on a network of bilateral treaties, but its practical administration has relied on a community of specialists; business advisers on the one hand and national officials on the other.

The rapid growth of transnational corporations has put great pressure on the international tax system, especially due to the increasing difficulty of ensuring that the internal transfer prices between related firms in different countries reflect a fair and acceptable allocation of costs and profits. Furthermore, the widespread use of intermediary companies formed in tax havens has led to complex counter-measures and a constant process of treaty renegotiation and interaction with national law.

The increasingly close administrative co-operation of tax authorities has been criticized as secretive and often arbitrary. Yet proposals for a more comprehensive framework and clearer legitimizing principles and procedures have conflicted with both the vested interests of international firms with sensitivities about national sovereignity. But major reforms are necessary, even if implemented piecemeal. Using perspectives from law, economics and social science, this book provides a systematic introduction to the major problems of international taxation of business income.

In doing so, it retrieves important policy issues that have become buried in technical intricacies of the international taxation system.