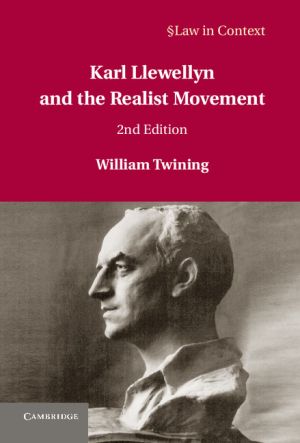 Temporarily unavailable
Despatched in 8 to 10 days.

First published in 1973, Karl Llewellyn and the Realist Movement is recognized as a classic account of American Legal Realism and its leading figure. Karl Llewellyn is the best known and most substantial jurist of the variegated group of lawyers known as the American Realists.

A man of wide interests and colorful character, he made important contributions to legal theory, legal sociology, commercial law, contract law, civil liberties, and legal education. This intellectual biography sets Llewellyn in the broad context of the rise of the American Realist Movement and contains a brief overview of Llewellyn's life and character before focusing attention on his most important works, including The Cheyenne Way, The Bramble Bush, The Common Law Tradition, the Uniform Commercial Code, and some significant manuscripts.

In this second edition the original text is unchanged and is supplemented with a preface by Frederick Schauer and a lengthy afterword in which William Twining gives a fascinating personal account of the making of the book and comments on developments in relevant legal scholarship over the past forty years.

Contents:
Part I. The Rise of the Realist Movement 1870-1931
Introduction:
1. Langdell's Harvard
2. Corbin's Yale, 1897-1918
3. Columbia in the 1920s
4. The aftermath of the split
5. The realist controversy, 1930-1931
Part II. The Life and Work of Karl Llewellyn: A Case Study:
6. The man
7. Two early works
8. The Cheyenne Way
9. Law in our society
10. The Common Law Tradition
11. The genesis of the uniform commercial code
12. The jurisprudence of the uniform commercial code
13. Miscellaneous writings
14. The significance of Llewellyn: an assessment
Part III. Conclusion:
15. The significance of realism.