This book is now Out of Print.
A new edition has been published, the details can be seen here:
Toward a New Legal Common Sense: Law, Globalization, and Emancipation 3rd ed isbn 9781316610459 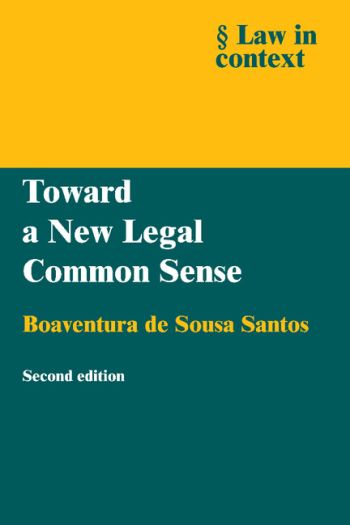 
There are those who believe that modern society's reliance upon law, politics and science to both regulate and emancipate society has reached a crisis point and can no longer provide answers to current social problems. Toward a New Legal Common Sense engages in a series of sociological analyses of law in order to illustrate the need for a profound theoretical reconstruction of the notion of legality based on locality, nationality and globality.

In this way the author shows how developments including suprastate organisations such as the European Union and international human rights law can be given their proper place in the sociology of law, and suggests a new set of social structures that might sustain the emancipatory elements that have disappeared from modern society.

This new edition, of a title originally published by Routledge (New York), is part of the acclaimed Law in Context Series, whose aim is to develop broad interdisciplinary perspectives on law. Toward a New Legal Common Sense is written for students taking law and globalisation courses, and political science, philosophy and sociology students doing optional subjects.

Contents:
1. The tension between regulation and emancipation in western modernity and its demise
2. Toward an oppositional postmodern understanding of law
3. Legal plurality and the time-spaces of law: the local, the national, and the global
4. The law of the oppressed: the construction and reproduction of legality in Pasargada
5. Globalization, nation-states and the legal field: from legal diaspora to legal ecumenism
6. Law and democracy: the global reform of courts
7. On modes of production of social law and social power
8. Law: a map of misreading
9. Can law be emancipatory?
Conclusion.