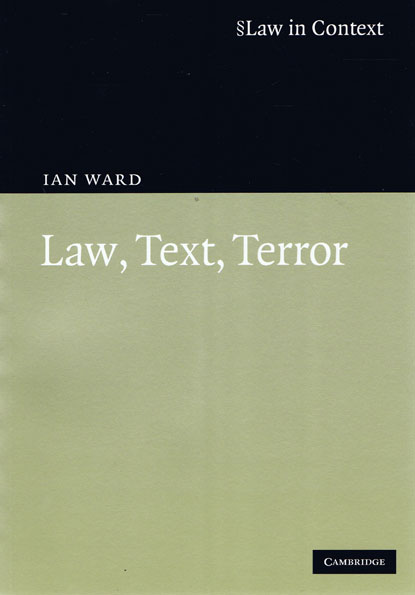 The relationship between law and terrorism has re-emerged recently as a pressing issue in contemporary jurisprudence. Terrorism appears to take law to its limit, whilst the demands of counter-terrorism hold the cause of justice in contempt. At this point the case for engaging alternative intellectual approaches and resources is compelling.

Ian Ward argues that through a closer appreciation of the ethical and aesthetical dimensions of terror, as well as the historical, political and cultural, we can better comprehend modern expressions and experiences of terrorism. For this reason, alongside juristic responses to modern expressions of terrorism, Law, Text, Terror examines a variety of supplementary literary texts as well as alternative intellectual approaches; from the drama of Euripides and Shakespeare, to the rhetoric and poetry of Burke and Shelley, the literary feminisms of Lessing and Rame, and the narrative existentialism of Conrad, Coetzee, Dostoevsky and DeLillo.

Contents:
Introduction
1. Terror and the sense sublime
2. Angry Jove
3. Voices of the terrified
4. Where are the women?
5. Stark humanity
6. The stuff of nightmares
7. The devil’s big day.