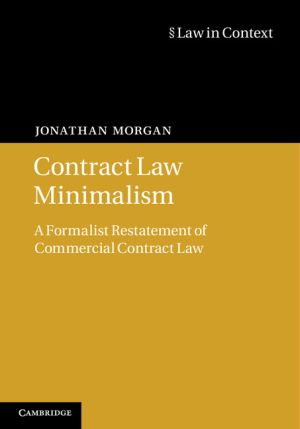 Commercial contract law is in every sense optional given the choice between legal systems and law and arbitration. Its 'doctrines' are in fact virtually all default rules.

Contract Law Minimalism advances the thesis that commercial parties prefer a minimalist law that sets out to enforce what they have decided - but does nothing else. The limited capacity of the legal process is the key to this 'minimalist' stance. This book considers evidence that such minimalism is indeed what commercial parties choose to govern their transactions. It critically engages with alternative schools of thought, that call for active regulation of contracts to promote either economic efficiency or the trust and co-operation necessary for 'relational contracting'.

The book also necessarily argues against the view that private law should be understood non-instrumentally (whether through promissory morality, corrective justice, taxonomic rationality, or otherwise). It sketches a restatement of English contract law in line with the thesis.

Contents:
Part I. Clearing the Ground:
1. Does instrumentalism 'fit' contract law?
2. Justifying the instrumental approach
Part II. Social Sciences and the Law of Contract:
3. A critique of neoclassical law and economics
4. Relational contracting: trust, business and law
5. Extra-legal norms: the irrelevance of the law (of contract)?
Part III. Contract Law Minimalism:
6. Defining contract law minimalism, or the 'new formalism'
7. Against regulation through contract law
8. The limited capacity of contract law
9. What business wants: evidence from the 'markets for law'
10. A formalist restatement of commercial contract law.