The Constitutionalization of European Budgetary Constraints 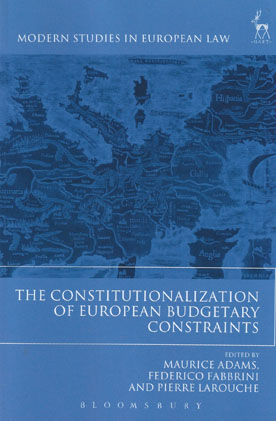 The recently enacted Treaty on the Stability, Coordination and Governance of the Economic and Monetary Union (generally referred to as the Fiscal Compact) has introduced a 'golden rule', which is a detailed obligation that government budgets be balanced.

Moreover, it required the 25 members of the EU which signed the Treaty in March 2012, to incorporate this 'golden rule' within their national Constitutions. This requirement represents a major and unprecedented development, raising formidable challenges to the nature and legitimacy of national Constitutions as well as to the future of the European integration project.

This book analyses the new constitutional architecture of the European Economic and Monetary Union (EMU), examines in a comparative perspective the constitutionalization of budgetary rules in the legal systems of the Member States, and discusses the implications of these constitutional changes for the future of democracy and integration in the EU.

By combining insights from law and economics, comparative institutional analysis and legal theory, the book offers a comprehensive survey of the constitutional incorporation of new fiscal and budgetary rules across Europe and a systematic normative discussion of the legitimacy issues at play.

It thus contributes to a better understanding of the Euro-crisis, of the future of the EU, and the reforms needed towards a deeper and genuine EMU.

Contents:
Foreword: Fiscal Capacity and Constitutional Reform in the EMU Miguel Poiares Maduro
1.
Introduction-The Constitutionalization of European Budgetary Constraints: Eff ectiveness and Legitimacy in Comparative Perspective Maurice Adams, Federico Fabbrini and Pierre Larouche
Part 1 The New Constitutional Architecture of European Economic and Monetary Union
2.
Economic Governance and the Euro Crisis: Constitutional Architecture and Constitutional Implications Paul Craig
3.
The Use of International Law as a Tool for Enhancing Governance in the Eurozone and its Impact on EU Institutional Integrity Angelos Dimopoulos
4.
Differentiated Economic Governance and the Reshaping of Dominium Law Kenneth A Armstrong
5.
EU Fiscal Governance and the Effectiveness of its Reform Alexandre de Streel
6.
Maastricht Revisited: Economic Constitutionalism, the ECB and the Bundesbank Marijn van der Sluis
7.
The Independence of the ECB after the Economic Crisis Stefania Baroncelli
Part 2 The Constitutionalization of European Budgetary Constraints: Comparative Experiences
8.
(Un)Balanced Budget Rules in Europe and America Pieter-Augustijn Van Malleghem
9.
A Legalization of Financial Constitutions in the EU? Reflections on the German, Spanish, Italian and French Experiences Giacomo Delledonne
10.
Fiscal Stability Rules in Central European Constitutions Marek Antos
11.
Can Constitutional Rules, Even if 'Golden', Tame Greek Public Debt? Lina Papadopoulou
12.
Mandatory Balanced Budget in Dutch Legislation Following Examples Abroad? Michal Diamant and Michiel van Emmerik
13.
An Analysis of the Method and Efficacy of Ireland's Incorporation of the Fiscal Compact Roderic O'Gorman
Part 3 Towards a Genuine EMU: Democracy, Legitimacy and Integration
14.
Domestic Courts, Constitutional Constraints and European Democracy: What Solution for the Crisis? Ingolf Pernice
15.
National Parliaments' Say on the New EU Budgetary Constraints: The Case of Spain and Ireland Sonia Piedrafita
16.
Who Got to Adjudicate the EU's Financial Crisis and Why? Judicial Review of the Legal Instruments of the Eurozone Samo Bardutzky and Elaine Fahey
17.
The Impact of Stronger Economic Policy Co-ordination on the European Social Dimension: Issues of Legitimacy Francesco Costamagna
18.
Power and Legitimacy in the Eurozone: Can Integration and Democracy Be Reconciled? Peter L Lindseth
19.
From Fiscal Constraints to Fiscal Capacity: The Future of EMU and its Challenges Federico Fabbrini