What Form of Government for the European Union and the Eurozone 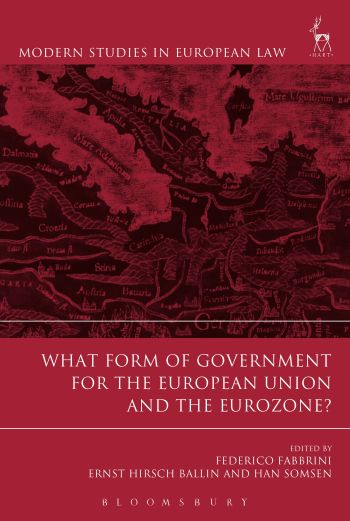 What is the form of government of the European Union (EU)? And how is the institutional governance of the Eurozone evolving? These questions have become pressing during the last years.

On the one hand, the Euro-crisis and the legal and institutional responses to it have had major implications on the constitutional architecture of the EU and the Eurozone. On the other hand, the May 2014 elections for the European Parliament and the ensuing struggle to form the European Commission have brought to the fore new tensions in the EU political system.

The purpose of this book - which brings together the contributions of EU lawyers, comparative constitutional lawyers and political scientists, from all over Europe and the United States - is to offer a new look at the form of government of the EU and the Eurozone and consider its potential for future development.

While offering a plurality of perspectives on the form of government of the EU and the Eurozone, this book emphasizes how the Euro-crisis represents a watermark in the process of European integration, makes the case for a more legitimate and effective form of government for the EU and the Eurozone, and identifies possible windows of opportunity for future treaty reforms.

The volume will provide food for thought to scholars, policy-makers and the public at large as they continue debating about the most apt form of government for the EU and the Eurozone.

Contents:
1. Introduction: A New Look at the Form of Government of the European Union and the Eurozone Federico Fabbrini, Ernst Hirsch Ballin and Han Somsen
Part I: The Euro-crisis and Institutional Change
2. The Financial Crisis, the EU Institutional Order and Constitutional Responsibility 17 Paul Craig
3. The Governance Framework of the Eurozone and the Need for a Treaty Reform Christian Calliess
4. Intergovernmentalism and the New Framework of EMU Governance Georgios Maris and Pantelis Sklias
Part II: The Governance of Economic, Monetary and Financial Affairs
5. The Confusion of Tasks in the Decision-Making Process of the European Economic Governance Alexandre de Streel
6. Constitutional Changes in Euro Government and the Relationship Between the ECB and the Executive Power in the Union Thomas Beukers
7. The Single Supervisory Mechanism: Building the New Top-Down Cooperative Supervisory Governance in Europe Gianni LO Schiavo
Part III: Democracy: Representation, Participation and Accountability
8. Is the EU a Representative Democracy ? The Normative Debate and the Impact of the Euro-crisis Simona Piattoni
9. Participatory Democracy in Europe: Article 11 TEU and the Legitimacy of the European Union Christian Marxsen 10. Democratic Accountability of EU Executive Power: A Reform Agenda for Parliaments Deirdre Curtin
Part IV: The Parliamentarisation of the EU and its Critics
11. Towards a New Constitutional Architecture in the EU? R Daniel Kelemen
12. Enhancing European Democracy in Times of Crisis? - The Proposal to Politicise the Election of the European Commission's President Carlino Antpohler
13. In the Image of State: Constitutional Complexities of Engineering a European Democracy Anna Kocharov
Part V: New Institutional Developments
14. New Intergovernmentalism: The European Council and its President Uwe Puetter
15. Inter-Parliamentary Cooperation and its Challenges:The Case of Economic and Financial Governance Valentin Kreilinger
16. From Executive Federalism to Executive Government: Current Problems and Future Prospects in the Governance of EMU Federico Fabbrini

The EU as a Global Regulator for Environmental Protection: A Legitimacy Perspective
Ioanna Hadjiyianni
ISBN 9781509946679
To be published March 2021
Hart Publishing
£34.99