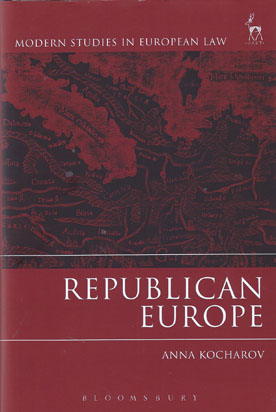 This book explores how a European political community can be advanced through EU constitutional law. The constitutional role of the Union is to ensure peace by addressing two types of conflict. The first are static conflicts of interests between the national polities in the EU.

These are avoided by ensuring reciprocal non-interference between Member States in the Union through deregulation in Union law. The second are dynamic conflicts of ideas about positive liberty held by the peoples of Europe that can be resolved through regulation in a European political space. Here, EU law enables a continuous process of re-negotiating a shared European idea of positive liberty that can be accepted as own by each national polity in the EU. These solutions to the two types of conflicts correspond to the liberal and republican models for Europe.

The claim of this book is that the constitutional design of Europe presents both liberal and republican features. Taking a hugely innovative approach, which draws on arguments from substantive law, constitutional theory, case law analysis, insights from psychology and philosophy, it identifies how best to strengthen the Union through constitutional law.

Contents:
Introduction
1. Europe in Crises
2. Policy Choices and Constitutional Choices
3. What's In a Policy?
4. Argument Overview
1. Liberty in the Constitutional Construct of Europe
1. The Constitutional Soul of Europe
2. Legitimacy of the Union and the Paradox of Polity
3. Capturing the Paradox: Voice, Exit and Loyalty
4. The Three Aspects of Liberty
5. Europe's Love Triangle
6. Europe as a Liberty-Preserving Construct
7. Constitutive Elements of EU Constitutional Order
2. A Union of Polities: Negative Liberty
1. The Nature of Europe's Union: Non-Interference Between National Polities
2. Non-Interference vs Positive Liberty in EC External Agreements
3. The Boundaries of Europe's Union: Reciprocity of Commitment
4. Constitutional Dilemma of Internal over External
5. Non-Interference between Member States Prevails over External Positive Liberty
6. The Rights–Admission Dichotomy to Balance Negative and Positive Liberty
7. Integration Through Law or Integration Through Politics?
3. A Political Union: Positive Liberty
1. A New Solution for an Old Problem
2. Emancipation of Politics and the European Political Space
3. Emergence of a European Political Process
4. Constitutional Elements of Post-Lisbon Law
5. Pluralism Under Union Law
4. Conflict in Union Law
1. Conflict as the Object of Union Law
2. Legitimacy of Policy Choices
3. Deciding Who Decides (in) Union Law
4. Demise of the Vertical Balance of Powers
5. From Balance of Powers to Balance of Polities
5. The EU Court and Liberty from Dependence
1. The Triumph of Positive Liberty
2. Liberal Review of a Republican Policy
3. Domination of Mutual Trust and the Faux Virtue of Solidarity
4. The Invisible Liberty
6. Conclusion: Union Law as the Pacifier of Conflicts

Collective Rights in Europe: A Comparative Study of Safeguards and Barriers
Rebecca Money
ISBN 9781849463690
To be published August 2021
Hart Publishing