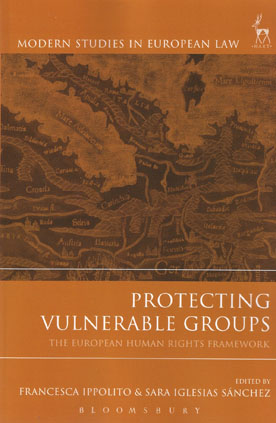 The concept of vulnerability has not been unequivocally interpreted either in regional or in universal international legal instruments.

This book analyses the work of the EU and the Council of Europe in ascertaining a clear framework or a set of criteria suitable to determine those who should be considered vulnerable and disadvantaged. It also explores the measures required to protect their human rights. Key questions can be answered by analysing the different methods used to determine the levels of protection offered by the two European systems.

These questions include whether the Convention and the case law of the Strasbourg Court, the monitoring mechanisms of the Council of Europe, EU law and the case law of the European Court of Justice enhance the protection of vulnerable groups and expand the protection of their rights, or, alternatively, whether they are mainly used to fill in relatively minor gaps or occasional lapses in national rights guarantees.

The analysis also shows the extent to which these two European systems provide analogous, or indeed divergent, standards and how any such divergence might be problematic in light of the EU accession to the ECHR.

Contents:
1. Introduction Francesca Ippolito and Sara Iglesias Sanchez
I. INHERENT VULNERABILITY
2. (De)Constructing Children's Vulnerability under European Law Francesca Ippolito
3. Reshaping EU Old Age Law in the Light of the Normative Standards in International Human Rights Law in Relation to Older Persons Francesco Seatzu
4. Disability as a Form of Vulnerability under EU and CoE law: Embracing the 'Social Model'? Anja Wiesbrock 5. European Protection for Women Francette Fines
II. MINORITIES
6. European Law and Regional or Minority Languages: Cultural Diversity and the Fight against Linguistic Vulnerability Olivier Dubos and Victor Guset
7. The Many Vulnerabilities of the Roma and the European Legal Framework Tawhida Ahmed
8. Indigenous Peoples' Cultural Identity under EU Law and the ECHR: A Non-trade Interest or a Human Right? Julinda Beqiraj
9. The Protection of Religious Minorities in Europe: Strengths and Weaknesses Erica Howard
10. The Protection of Sexual Minorities in European Law Peggy Ducoulombier
III. NON-NATIONALS
11. The Unexpected Precariat Caroline Sawyer
12. General and Specific Vulnerability of Protection-Seekers in the EU: Is there an Adequate Response to their Needs? Ulrike Brandl and Philip Czech
13. Dealing with International Vulnerability: European Law and Climate-Induced Migrants Catherine-Am lie Chassin
14. The Protection of Vulnerable People and the Free Movement of Persons within the European Union: Two Worlds Apart? Alessandra Lang
IV. VICTIMS OF ILLEGAL ACTS
15. The Place of the Victim in Europe's Area of Criminal Justice Valsamis Mitsilegas
16. Responding to the Plight of Victims of Terrorism: European Approaches and Dilemmas Jessica Almqvist
17. Victims of Trafficking and Smuggling of Migrants in International and European Law Jacobo R os Rodr guez
V. CIRCUMSTANTIAL VULNERABILITY
18. The Effective Supervision of European Prison Conditions Steve Foster
19. The Ultimate Social (or is it Economic?) Vulnerability: Poverty in European Law Krista Nadakavukaren Schefer
20. Irregular Migrants in Europe: Deprivation of Status as a Type of State-Imposed Vulnerability Sara Iglesias Sanchez