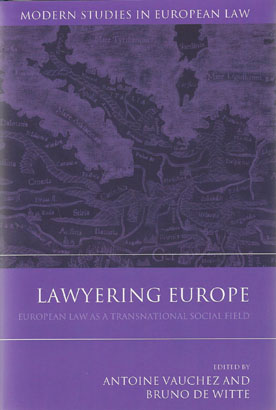 While scholarly writing has dealt with the role of law in the process of European integration, so far it has shed little light on the lawyers and communities of lawyers involved in that process.

Law has been one of the most thoroughly investigated aspects of the European integration process, and EU law has become a well-established academic discipline, with the emergence more recently of an impressive body of legal and political science literature on 'European law in context'.

Yet this field has been dominated by an essentially judicial narrative, focused on the role of the European courts, underestimating in the process the multifaceted roles lawyers and law play in the EU polity, notably the roles they play beyond the litigation arena. This volume seeks to promote a deeper understanding of European law as a social and political phenomenon, presenting a more complete view of the European legal field by looking beyond the courts, and at the same time broadening the scholarly horizon by exploring the ways in which European law is actually made.

To do this it describes the roles of the great variety of actors who stand behind legal norms and decisions, bringing together perspectives from various disciplines (law, political science, political sociology, and history), to offer a global multi-disciplinary reassessment of the role of 'law' and 'lawyers' in the European integration process.

Contents:
Introduction. Euro-lawyering, Transnational Social Fields and European Polity-Building Antoine Vauchez Part I: Repeat Players 1. 'Ten Majestic Figures in Long Amaranth Robes': The Formation of theCourt of Justice of the European Communities Antonin Cohen 2. The Role of Legal Services in the Elaboration of European Legislation Jean Paul Jacque 3. From the Margins on the European Legal Field: The Governments' Agentsand their Influence on the Development of European Union Law Marie-Pierre Granger Part II: Centres and Peripheries 4. Courts United? On European Judicial Networks Maartje de Visser and Monica Claes 5. European Union Law: A Unified Academic Discipline? Bruno de Witte 6. The ECHR and the Birth of (European) Human Rights Law as anAcademic Discipline Stephanie Hennette-Vauchez Part III: European Elites and their Legal Credentials 7. Where Have all the Lawyers Gone? Structures and Transformations ofTop European Commission Officials' Legal Training Didier Georgakakis and Marine de Lassalle 8. The Creation of Institutional Expertise at the European Parliament: Legal and Political Resources of the Members of the Constitutional Affairs Committee Laurent Godmer and Guillaume Marrel 9. Law and Lawyers in the Brussels World of Commercial Consultants Christian Lahusen Part IV: The Disputed Role of Law in the Government of Europe 10. The Power of Legal Knowledge in the Reform of Fundamental Law: The Case of the European Charter of Fundamental Rights Mikael Rask Madsen 11. Soft Law and the Rule of Law in the European Union: Revision or Redundancy? Mark Dawson 12. Eurolegalism and the European Legal Field R Daniel Kelemen 13. Opportunities and Limits of a Weak Field: Lawyers and the Genesis of a Field of European Economic Power Yves Dezalay