Illegally Staying in the EU: An Analysis of Illegality in EU Migration Law 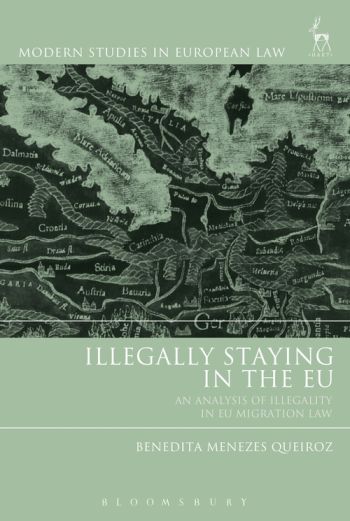 Principally, this book comprises a conceptual analysis of the illegality of a third-country national's stay by examining the boundaries of the overarching concept of illegality at the EU level. Having found that the holistic conceptualisation of illegality, constructed through a combination of sources (both EU and national law) falls short of adequacy, the book moves on to consider situations that fall outside the traditional binary of legal and illegal under EU law. The cases of unlawfully staying EU citizens and of non-removable illegally staying third-country nationals are examples of groups of migrants who are categorised as atypical. By looking at these two examples the book reveals not only the fragmentation of legal statuses in EU migration law but also the more general ill-fitting and unsatisfactory categorisation of migrants.

The potential conflation of illegality with criminality as a result of the way EU databases regulate the legal regime of illegality of a migrant's stay is the first trend identified by the book. Subsequently, the book considers the functions of accessing legality (both instrumental and corrective). In doing so it draws out another trend evident in the EU illegality regime: a two-tier regime which discriminates on the basis of wealth and the instrumentalisation of access to legality by Member States for mostly their own purposes.

Finally, the book proposes a corrective rationale for the regulation of illegality through access to legality and provides a number of normative suggestions as a way of remedying current deficiencies that arise out of the present supranational framing of illegality.

Contents:
1. 'What Part of Illegality Don't You Understand?': Illegality in EU Migration Law
I. Introduction
II. Conceptual Analysis
III. Legal Sources
IV. EU Institutional Framework
V. Conclusion
2. The Case of Unlawfully-staying EU Citizens
I. Introduction
II. Illegally-staying Third-country Nationals and Unlawfully-staying EU Citizens
III. Conclusion
3. Non-removable Migrants in the EU
I. Introduction
II. The Definition and the Causes of the Non-removability of Irregular Migrants in EU Law
III. The Atypical Status of Non-removable Irregular Migrants
IV. The Remedies for Non-removability: National and European Perspectives
V. Conclusion
4. The Potential Effects of Information Technology Vis-à-Vis Illegality
I. Introduction
II. EU Immigration Databases Under Construction
III. The Erosion of the Purpose Limitation Principle
IV. Enhanced Accessibility versus Proportionality and Necessity Concerns
V. From Immigration to General Intelligence Databases?
VI. What's Next for Immigration Information Systems? A Brand New World of Transnational Surveillance of Illegality or the Same Old Story?
VII. The Era of Potential Digital Criminalisation of Illegally-staying Third-country Nationals
VIII. Conclusion
5. Access to Legality in the EU: An Instrumental or Corrective Mechanism?
I. Introduction
II. Access to Legality in EU Migration Law: The Definition, Instrumental Use and Corrective Potential
III. Part I: The Instrumentalisation of the Access to Legality
IV. Part II: The Potential Corrective Role of Access to Legality at the Supranational Level
V. The Corrective Function of Regulating Legality from an EU Law Perspective
VI. Conclusion