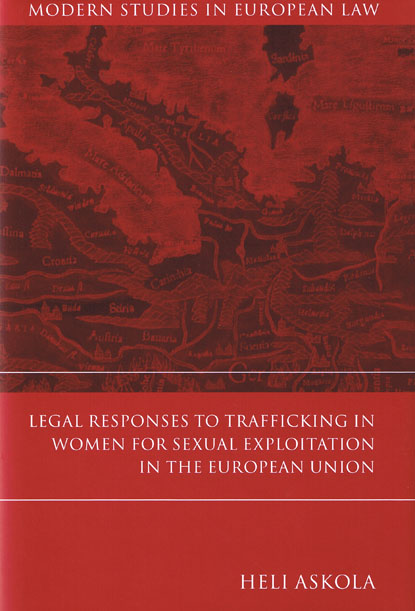 The phenomenon of trafficking in women for sexual exploitation, which in the last decade has changed from a marginal 'non-issue' to a legitimate concern in many parts of the world, has become familiar through newspaper coverage, and now, finally, legislators and law enforcement agencies have begun to act. In Europe many EU Member States now have (or are developing) at least some sort of anti-trafficking policies (with some of them in the forefront of global anti-trafficking efforts). Moreover, the EU itself has become markedly more active with regard to curbing trafficking in human beings, as part of its migration control and police and judicial co-operation functions.

However, even co-ordinated efforts such as those being worked on by the EU tend to produce only short-term 'cures' to a problem that is in truth global and structural in nature and which cannot be eradicated - or necessarily even significantly reduced - through policing and migration control measures alone. Too often there is little debate on broader measures which might be targeted to address the 'root causes' of trafficking, such as poverty, under-development, general lack of economic and migration opportunities and, above all, gender inequality.

Against this background, this book deals with present efforts to control trafficking in women for sexual exploitation. In doing so it examines claims that what is needed to effectively prevent and tackle trafficking is a 'comprehensive' approach, and at the very least one that is far more wide-ranging and coherent than what exists today and also analyses the assertion that destination countries, and more specifically Member States of the EU, could and perhaps should, take more action against trafficking through regional co-operation, particularly in the framework of the EU, rather than as individual Member States.

The book will be of interest to a wide range of scholars in EU law, human rights, comparative law, sociology, feminist theory and politics, as well as policy-makers, practitioners and NGO activists in various European countries.

Contents:
1. Introduction 1
1.1. THE BACKGROUND, AIM AND STRUCTURE OF THE BOOK
1.2. DIVERGENCE, CONVERGENCE AND COUNTRY STUDIES
1.3. SOME COMMENTS ON TERMINOLOGY AND THE NATURE OF THE PROBLEM
2. Feminism, Prostitution and Trafficking: A Complex Approach
2.1. THE BACKGROUND: SEXUAL SLAVERY AND SEX WORK REVISITED
2.2. TALKING ABOUT TRAFFICKING: DEBATES AND DEFINITIONS
2.3. TOWARDS A MORE COMPREHENSIVE UNDERSTANDING?
3. EC Free Movement Law, Freedom and Prostitution
3.1. NOTIONS OF FREEDOM AND THE LEGAL REGULATION OF PROSTITUTION
3.2. FREEDOM IN EUROPEAN LAW
3.2.1. The Common (Sex) Market? Freedom and Prostitution in EC Law
3.2.2. Some Girls are Freer Than Others: EC Law and its Outsiders
3.3. CONCLUSIONS
4. Trafficking as Irregular Migration
4.1. THE EUROPEAN MIGRATION POLICY CONTEXT
4.1.1. Crowded Houses, People's Homes or Fortress(es in) Europe
4.1.2. (Im)Migration Policy Dilemmas and the European Union
4.2. FEMALE MIGRANTS, MIGRATION POLICIES AND EXPLOITATION
4.2.1. From Structural Causes to Exploitative Situations
4.2.2. Helping Trafficking Victims through Short-term Residence Permits?
4.3. CONCLUSIONS
5. Criminal Justice Co-Operation Against Trafficking
5.1. TRAFFICKING OFFENCES IN THE MEMBER STATES
5.1.1. On the Goals and Contents of the Criminal Provisions
5.1.2. Applying the Laws: Female Caricatures and Invisible Men
5.2. TRAFFICKING AND THE THIRD PILLAR
5.2.1. Harmonising or Not-Repressive Emphasis with Vague Results
5.2.2. Anti-trafficking Co-operation: Security, Justice or Freedom?
5.3. CONCLUSIONS
6. Trafficking and Human Rights
6.1. FEMALE MIGRANTS AND INTERNATIONAL HUMAN RIGHTS
6.1.1. Actual Victims of Trafficking: Included if Invisible?
6.1.2. Potential Victims of Trafficking: Marginalisation of the Marginalised?
6.2. EXCLUSION OF MIGRANT WOMEN FROM DEBATES ON WOMEN'S RIGHTS
6.3. THE EUROPEAN UNION'S HUMAN RIGHTS DIMENSION
6.4. CONCLUSIONS
7. Towards a More Comprehensive Approach to Trafficking?
7.1. ANTI-TRAFFICKING IN THE SHORT TO MEDIUM TERM
7.2. PREVENTING TRAFFICKING IN WOMEN IN THE LONG RUN
7.2.1. Development, Migration and Gender Empowerment
7.2.2. Sexual Ideologies and the Market for Sexual Services
7.3. FINAL REMARKS