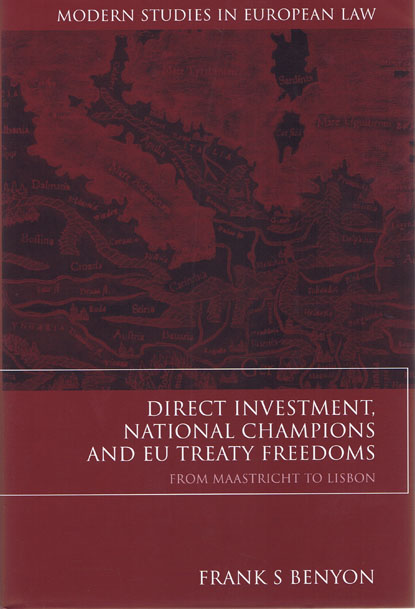 Temporarily unavailable
Despatched in 2 to 4 days.

Within the EU, the legal dimension of trade in goods and, more recently, of trade in services have gained clear contours. This is less true for cross-border direct investments.

The ECJ has started to develop the full potential of the free movement of capital and the freedom of establishment only recently. This has raised a number of important new questions, including how the two freedoms relate to each other, and how to balance the individuals' rights to market access with the Member States' competence to regulate in the public interest.

In particular, the use of state measures to protect strategic or alleged public interests selectively, or to foster national champions, will be considered. Under settled case law, it suffices that a measure renders the exercise of the freedom "less attractive" to find an infringement of the free movement rules. Potentially this opens the door for a broad review of the appropriateness of all non-harmonised mandatory rules contained in general national laws.

There is also a general question of when free movement of capital and freedom of establishment may have horizontal effect, a matter raised by the Viking case. [Horizontal application of the fundamental freedoms could lead to the exercise of control over private arrangements in many areas, including company law if they have a tendency to impede, or dissuade, market access by investors from other Member States.] The particular situation of third country investors also has to be considered, insofar as they may benefit from the free movement of capital but not from the establishment and services freedoms.

Recent developments in EU company law are discussed, notably those concerning simple cross-border relocation of businesses as well as those regulating take-over and mergers. Overall the book analyses the role of the market and the role of the state with regard to direct investment, delineates the competences of the EU and the Member States in this field and places the debate in the larger context of international direct investment.

[Focussing on recent developments, cases and debates,] the book also looks at the changes made to the applicable rules by the Treaty of Lisbon, including the inclusion of foreign direct investment into the Community's trade policy, thus providing an overview of this cutting-edge issue and a reflection on the rationales that should guide the evolution of this field of law.

The Division of Competences Between the EU and the Member States: Reflections on the Past, the Present and the Future (eBook)
Edited by:  Sacha Garben, Inge Govaere
ISBN 9781509913497
Published October 2017
Hart Publishing
£37.80

Strengthening the Rule of Law in Europe: From a Common Concept to Mechanisms of Implementation (eBook)
Werner Schroeder
ISBN 9781849469500
Published October 2016
Hart Publishing
£37.80