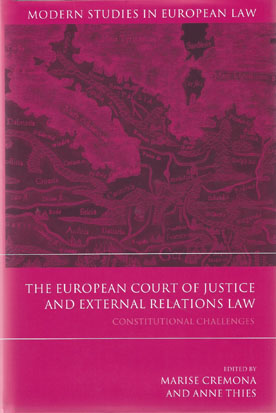 This edited collection appraises the role, self-perception, reasoning and impact of the European Court of Justice on the development of European Union (EU) external relations law. Against the background of the recent recasting of the EU Treaties by the Treaty of Lisbon and at a time when questions arise over the character of the Court's judicial reasoning and the effect of international legal obligations in its case law, it discusses the contribution of the Court to the formation of the EU as an international actor and the development of EU external relations law, and the constitutional challenges the Court faces in this context.

To what extent does the position of the Court contribute to a specific conception of the EU? How does the EU's constitutional order, as interpreted by the Court, shape its external relations? The Court still has only limited jurisdiction over the EU's Common Foreign and Security Policy: why has this decision been taken, and what are its implications? And what is the Court's own view of the relationship between court(s) and foreign policy, and of its own relationship with other international courts?

The contributions to this volume show that the Court's influence over EU external relations derives first from its ability to shape and define the external competence of the EU and resulting constraints on the Member States, and second from its insistence on the autonomy of the EU legal order and its role as 'gatekeeper' to the entry and effect of international law into the EU system. It has not - in the external domain - overtly exerted influence through shaping substantive policy, as it has, for example, in relation to the internal market. Nevertheless the rather 'legalised' nature of EU external relations and the significance of the EU's international legal commitments mean that the role of the Court of Justice is more central than that of a national court with respect to the foreign policy of a nation state. And of course its decisions can nonetheless be highly political.

Contents:
1. Introduction Marise Cremona and Anne Thies
PART I THE CJEU'S ROLE IN THE DEVELOPMENT OF EXTERNAL RELATIONS LAW
2. A Reticent Court? Policy Objectives and the Court of Justice Marise Cremona
3. A Selfish Court? The Court of Justice and the Design of International Dispute Settlement beyond the European Union Bruno de Witte
4. A Powerless Court? The European Court of Justice and the Common Foreign and Security Policy Christophe Hillion
PART II JURISPRUDENCE AND THE ALLOCATION OF EXTERNAL COMPETENCE
5. Vertical Division of Competences and the Objectives of the European Union's External Action Eleftheria Neframi
6. The Case Law of the Court of Justice of the EU and the Allocation of External Relations Powers: Whither the Traditional Role of the Executive in EU Foreign Relations? Pieter Jan Kuijper
7. The Potential for Inter-Institutional Conflicts before the Court of Justice: Impact of the Lisbon Treaty Peter Van Elsuwege
PART III EXTERNAL RELATIONS, THE COURT AND THE UNION LEGAL ORDER
8. General Principles in the Development of EU External Relations Law Anne Thies
9. The Many Visions of Europe. Insights from the Reasoning of the European Court of Justice in External Relations Law Loic Azoulai
10. The Court of Justice's Participation in Judicial Discourse: Theory and Practice Christina Eckes
PART IV THE COURT AND THE INTERNATIONAL LEGAL SYSTEM
11. The Kadi Case-Constitutional Core Values and International Law-Finding the Balance? Juliane Kokott and Christoph Sobotta
12. The Arrangement Governing the Relationship between the ECtHR and the CJEU in the Draft Treaty on the Accession of the EU to the ECHR Joni Heliskoski
13. Worlds Apart? Comparing the Approaches of the European Court of Justice and the EU Legislature to International Law Jan Wouters, Jed Odermatt and Thomas Ramopoulos