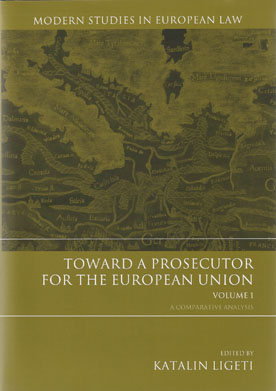 In an era in which the EU's influence in criminal law matters has expanded rapidly, attention has recently turned to the possible creation of a European Public Prosecutor's office. This two volume work presents the results of a study carried out by a group of European criminal law experts, with the financial support of the EU Commission in 2010-2011, whose aims were to examine in detail current public prosecution systems in the Member States and to scrutinise proposals for a new European office.

Volume I begins with thorough descriptions of 24 different national legal systems of investigation and prosecution, addressing a range of evidential and procedural safeguards. These will serve as a point of reference for all future research on public prosecutors.

Volume 1 also contains a series of cross-cutting studies of the key issues which will inform debates about the creation of a European Public Prosecutor´s Office, including studies of vertical cooperation in administrative investigations in subsidy and competition cases, the accession of the EU to the ECHR, judicial control in cooperation in criminal matters, mutual recognition and decentralised enforcement of European competition law.

Volume II (which will be published in 2013) presents a draft set of model rules for the procedure of the European Public Prosecutors' Office and continues with a set of comparative studies of the national legal systems which cover the gathering of evidence, seizure of assets, arrests, tracking and tracing, prosecution measures, procedural safeguards, the presumption of innocence and the right to silence, access to the file and victim reconciliation. Volume 2 concludes with the final report, written by Professor Ligeti, summarising the findings of the group and reporting on the prospects for the proposed reform.