EU Asylum Procedures and the Right to an Effective Remedy 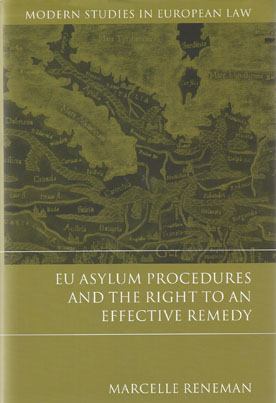 Adequate and fair asylum procedures are a precondition for the effective exercise of rights granted to asylum applicants, in particular the prohibition of refoulement.

In 1999 the EU Member States decided to work towards a Common European Asylum System. In this context the Procedures Directive was adopted in 2005. This directive provides for important procedural guarantees for asylum applicants, but also leaves much discretion to the EU Member States to design their own asylum procedures.

This book examines the meaning of the EU right to an effective remedy in terms of the legality and interpretation of the Procedures Directive in regard to several key aspects of asylum procedure: the right to remain on the territory of the Member State, the right to be heard, the standard and burden of proof and evidentiary assessment, judicial review and the use of secret evidence.

Contents:
Acknowledgements
List of Abbreviations
1. Introduction: In Search of EU Standards for Asylum Procedures
Part I Preliminary Issues
2. The Common European Asylum System and the Applicability of EU Procedural Standards
3. The Subsidiary Role of International Treaties as Sources of Inspiration for EU Fundamental Rights
4. The EU Right to an Effective Remedy and Related Procedural Rights and Principles
5. Preliminary Conclusions and Methodology used for the Following Chapters
Part II Key Issues of Asylum Procedures
6. The Right to Remain on the Territory of the Member State
7. The Asylum Applicant’s Right to be Heard on his Asylum Motives
8. The Burden and Standard of Proof and Evidentiary Assessment
9. Judicial Review of the Establishment and Qualification of the Facts
10. The Use of Secret Information in Asylum Cases
Part III Conclusions
11. Towards a Common and Fair European Asylum Procedure?
Bibliography
Index