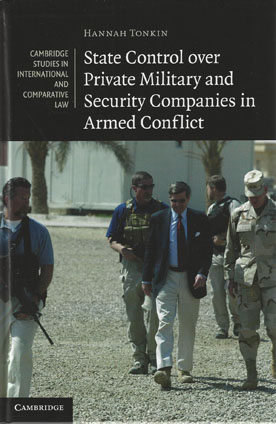 The past two decades have witnessed the rapid proliferation of private military and security companies (PMSCs) in armed conflicts around the world, with PMSCs participating in, for example, offensive combat, prisoner interrogation and the provision of advice and training.

The extensive outsourcing of military and security activities has challenged conventional conceptions of the state as the primary holder of coercive power and raised concerns about the reduction in state control over the use of violence.

Hannah Tonkin critically analyses the international obligations on three key states – the hiring state, the home state and the host state of a PMSC – and identifies the circumstances in which PMSC misconduct may give rise to state responsibility.

This analysis will facilitate the assessment of state responsibility in cases of PMSC misconduct and set standards to guide states in developing their domestic laws and policies on private security.