Religious Offence and Human Rights: The Implications of Defamation of Religions 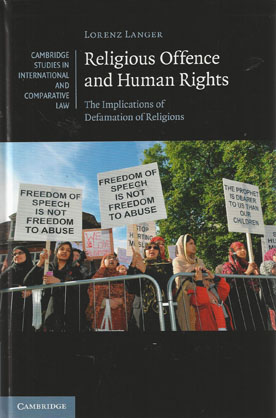 Should international law be concerned with offence to religions and their followers? Even before the 2005 publication of the Danish Mohammed cartoons, Muslim States have endeavoured to establish some reputational protection for religions on the international level by pushing for recognition of the novel concept of 'defamation of religions'.

This study recounts these efforts as well as the opposition they aroused, particularly by proponents of free speech. It also addresses the more fundamental issue of how religion and international law may relate to each other. Historically, enforcing divine commands has been the primary task of legal systems, and it still is in numerous municipal jurisdictions.

By analysing religious restrictions of blasphemy and sacrilege as well as international and national norms on free speech and freedom of religion, Lorenz Langer argues that, on the international level at least, religion does not provide a suitable rationale for legal norms.

Contents:
Introduction
Part I:
1. The Danish cartoons revisited
2. Legal responses to religious insult
3. The current legal framework
4. Invention of new alternatives? The concept of defamation of religions before and after the cartoons
5. Defining defamation
Part II:
6. First principles: norms and norm-rationales
7. Norm-rationales for the regulation of speech
8. The religious rationale
9. Religion, its defamation, and international law.

Rewriting Histories of the Use of Force: The Narrative of ‘Indifference'
Agathja Verdebout
ISBN 9781108838184
To be published September 2021
Cambridge University Press
£95.00