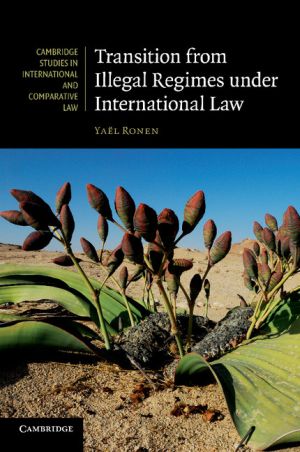 Yaël Ronen analyses the international legal ramifications of illegal territorial regimes, namely the illegal annexation of territory or illegal declarations of independence, by reference to the stage of transition from an illegal territorial regime to a lawful one. Six case studies (Namibia, Zimbabwe, the Baltic States, the South African Bantustans, East Timor and northern Cyprus) are used to explore the tension between the invalidity of the illegal regime's acts and their effectiveness, with respect to the international relations of such territories, their domestic legal systems, the status of settlers and land transfers. Relying heavily on primary and previously unconsidered sources, she focuses on the international legal constraints on the post-transition regime's policy, particularly in the context of international human rights law.

Contents:
Part I. The Law Governing Illegal Territorial Regimes
1. Introduction
2. The case studies
3. The obligation of non-recognition
Part II. Substantive Issues in Transition
4. Treaty relations of the territory
5. The status of settlers implanted by the illegal regime
6. The effect of transition on the internal law of the territory
7. Land titles granted under the illegal regime
8. Conclusion: illegality, non-recognition and transition.

International Investment Law and Legal Theory: Expropriation and the Fragmentation of Sources
Joerg Kammerhofer
ISBN 9781108839174
To be published May 2021
Cambridge University Press
£95.00